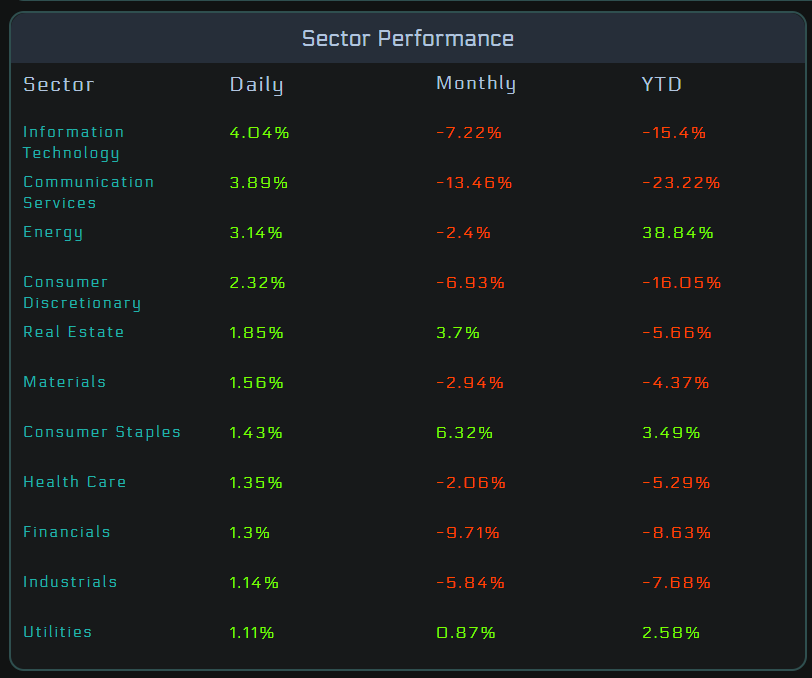 Market Outlook – Bearish but traders are trying to carve out a floor. Bounces are selling zones – breach of 4265 will bring buyers to the party. Four hour support looks like 4225 to 4213

Look at the late afternoon move in options from Chatter Quant

News from Stocktwits -a really good recap of moves

All 11 sectors finished in the green. 🥳 Technology and communications both bolted 4% while energy expanded 3.03%.

Here are the closing prices:

Avid traders knew this week would be a busy one in earnings land. 🌈 ✨ More than a fourth of the S&P 500 and 40% of the Nasdaq-100 were expected to report this week, including many of the U.S.’s largest non-financial firms.

Things got off to a slow, turbulent start with Microsoft and Google’s reports on Tuesday. Microsoft handily beat analyst estimates, but headed south after its report. And Google, well… it missed on top and bottom lines. Initially, that scared investors.

Yesterday, Facebook/Meta, PayPal, and Pinterest put investors back in order, however. All three companies posted worthy beats. 💪 Investors stopped chewing on their finger nails with hopes that Thursday’s earnings would solidify the case that Q1 2022 was a positive one for these titans of industry.

Ultimately, it looks like that is (mostly) the case. There were concessions to be made, but Apple, Amazon, Intel and Twitter rounded out a generally successful earnings season for “Big Tech” today. However, inflation and supply chain constraints offered to be the bear 🐻 of bad news for most companies.

Amazon was the worst-off today, losing 12.7% in after-hours trading. The company narrowly beat revenue expectations,  notching $116.4 billion in the quarter. However, Amazon’s earnings per share came in 9.6% below expectation at $7.56/share. They faulted inflation and higher wages for the miss. Those figures mean that Amazon’s costs “rose by 5% of sales“ or “$3 million an hour, every hour of every day, during the last 90 days…“ in the quarter. Check out the company’s earnings report here.

If you’re willing to look beyond Amazon, the grass was looking greener for the rest of today’s big reports. ☀️ Apple posted a monster beat, coming in at $97.28 billion in revenue (vs. $93.89 billion expected) and $1.52/share in EPS (vs. $1.43/share expected.) The company’s Services, Other Products, and Mac revenue businesses all posted double-digit YoY growth. Revenue for the company at-large was up 8.59%. Apple took the impetus to authorize $90 billion in new share buybacks, but the stock fell 4.4% after hours. Check out Apple’s report here.

Our last eye-opening earnings report was Intel, which has had a rough go since Apple abandoned Intel’s hardware for its own M1 chip. Over the last year, Intel has lost a fifth of its value in the market. The semi giant beat, but offered little future excitement in its guidance. Intel erased most of its intraday gains today and fell more than 4% after hours. Read more in the company’s IR report.

Twitter was also top-of-mind today when it reported earnings. However, the response to the company’s earnings was minimal given that the platform is being bought out by Elon Musk. Twitter said it would no longer provide guidance after noting that it missed estimated revenue figures. The company also revealed that Twitter miscounted its daily users for three years straight, so that’s pretty comical. Overall, kind of a trainwreck in Twitterland. 🔥 You can read the company’s insights here.

Overall, these reports weren’t so bad. Even though the bulk of Big Tech reports are over, we will check back in on overarching takeaways next week, and we’ll keep an eye out for more big reports to come (including a handful scheduled for tomorrow, which you can check out in the Stocktwits earnings calendar.) 📅

After announcing plans to lay off 9% of its full-time workforce earlier this week, broker-dealer giant Robinhood reported its first quarter earnings today. They were already expected to be messy, given a generally rough outlook for fintechs and broker-dealer businesses. 💡

A year ago, Robinhood’s business was one of the star-studded and shiny new fintechs which benefited from widespread new retail interest in investing, the GameStop/AMC short squeeze, and robust interest in cryptocurrency trading.

Unfortunately, that interest is harder to find in Q1 2022.

The company’s revenue is largely composed of “transaction-based revenues,” which arise from things such as payment for order flow (PFOF), among other user trading activities. Within that category of revenues, options is Robinhood’s biggest business: it was down -36% YoY to $127 million (yikes.)

Equities revenue took the greatest hit in the quarter, down -73% YoY to $36 million. Cryptocurrencies, one component of the business which Robinhood hopes will keep its business afloat was down -39% to $54 million.

On the bright side: the company’s loss narrowed YoY. This time last year, Robinhood’s loss was ($6.26) per share, or more than $1.4 billion in the quarter. However, the flip side of that positive development is comps: the company’s revenue was down -43% YoY.

Robinhood’s number of monthly active users also fell by 1.4 million quarter-over-quarter (that’s -10%), coming in at 15.9 million. However, the company’s total of “net cumulative funded accounts” jumped 27% YoY to 22.8 million. And in other positive news, Robinhood’s total amount of assets under custody rose 15% to $93 billion in assets under custody.

In its earnings report, Robinhood indicated that it will “no longer intend to provide revenue guidance.” 🚨 Instead, the company will “start reporting certain limited purpose statistical and operational results on a monthly basis,” which investors might interpret to mean that the company is deflecting from expectations of continued revenue decline.

Robinhood has rolled out new features in recent months to stop the hemorrhage of revenue — including more robust support, longer hours for extended trading, a new “Cash Card” which provides credit card-esque rewards via Cash App, crypto wallets, stock lending, and new cryptos in its Robinhood Crypto business. According to the report, Robinhood also hopes to expand to the UK/Europe and offer “tax-advantaged retirement accounts” by the end of the year. 🌎

It’s hard to know if product additions will help much at this point, though. With markets heading south across the board and the cloud of last year’s GameStop-related PR disaster looming overhead, Robinhood could continue lower. As we’ve written in recent weeks, the company is now looking more and more like buyout candy than a potential turnaround story at its newfound $9 billion market capitalization. 🍬

Robinhood was down 11% after hours.

$ROKU might have stood out as the report of the day, exploding more than 8% in trading. 🚀 🚀 However, the company’s Q1 2022 earnings report helped turn after-hours into a circus. The company beat on revenue, but missed on earnings. Here are the numbers:

The streaming service’s most anticipated metric, however, is its number of active accounts — which came right in line with estimates at 61.3 million active accounts, representing an increase of 1.1 million active accounts in Q1. The company also admitted its difficulties last quarter with supply disruptions, increased TV prices, and lower TV sales at the beginning of 2022. Roku’s shareholder letter explained:

Get a load of these moves. Like we said, a real after-hours circus:

$ROKU is trending on Stocktwits! 🔥 Read conversations about Roku on our $ROKU stream here.

The (Other) Earnings from the Day

Southwest Airlines leaped 2.09% as the company anticipates domestic travel to pick up in the next few months. $LUV beat earnings and sales estimates and expects to be profitable in the next three quarters of the year.

🥊 Pinterest addresses the TikTok threat in its first quarter earnings