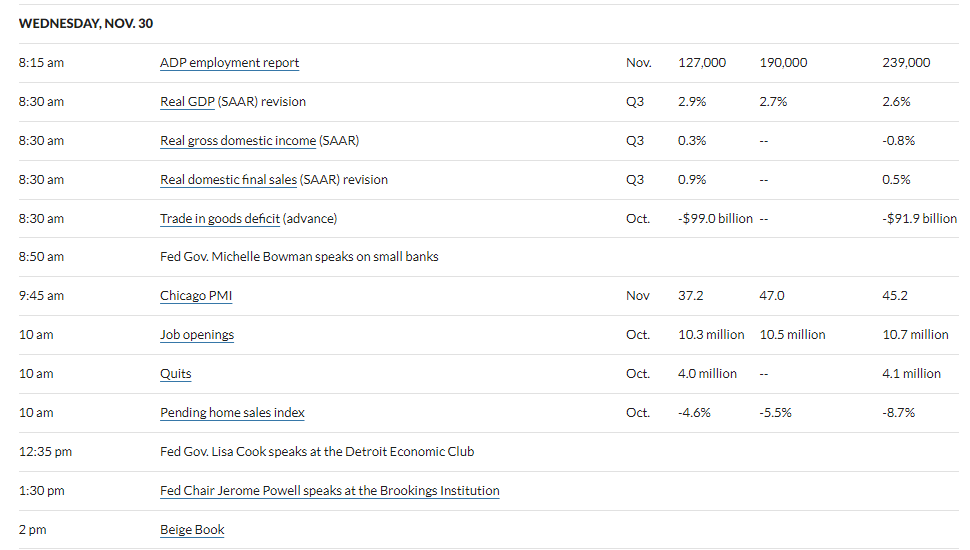 Market Outlook – We have another ‘newsy’ day ahead. Eyes on 4050 in $ES_F for follow through. Support looks like 4010. We’ve had a big squeeze so we should be seeing a bit of a pullback. A number of major ETFs and indices approached the 200moving average signaling a potential end to the bear market. My suspicion is that this is another bear market rally as watching the ticks showed quite a few single prints on the way up. Translation? We are likely in the midst of a squeeze that everyone needs to participate in or be left behind.

Rory Johnson writes for the Harkster and if you are interested in the oil complex, and macro news ( to include a bit on the matches in the overnight)- here it is – you can find him on Substack

All prices are at 7.45 GMT/2.45 EST, with changes reflecting movement from midnight GMT

Oil – Brent and Crude January futures off a touch in the Asian session with them currently trading at 85.40 and 80.30, respectively. Asian session muted as the recent oil rally fizzled out. Lot of uncertainty around, with the two big themes of OPEC+ and the EU Russian oil cap as we head towards the weekend. We remain on the side that OPEC+ will do nothing given oil is off its lows, China softening its stance on covid, and the EU decision is still pending. On that front, who knows what will come out of that. China PMI weighed on oil which also saw a large draw in the EIA data published yesterday, which saw the SPR levels at close to 40y lows.

EQ – Asia futures mixed and somewhat muted, given the US rally. Hang Seng off over one percent on the weaker China data at 18,812. The Kospi and Nikkei both firmer at 322 and 28,185, respectively.

The Nasdaq and S&P consolidating their gains overnight, with them trading currently at 12,0647 and 4084, respectively. Thank you Jay!

Gold – Gold Dec continues its Powell rally with a further two percent rise in Asia currently at 1791. Knocking on the door of the natural 1800 target with the August high just shy of 1805 also looking vulnerable, which would open up the topside towards the mid to high 1800’s. Downside first support at 1780 and then back to our 1750 pivot.

FI – US yields, as you’d expect post-Powell further sell-off in yields overnight in Asia, with the US2y and US10y currently trading at 4.35% and 3.61%, respectively.

European yields following the US lead and continuing on from the softness post EU inflation data which saw the curves bear flatten. The  German 10y yields currently trading at 1.855% and Italian 10y yields at 3.762%.

FX – No surprises that the USD is licking its wounds with a further sell off in Asia. The USD Index is currently trading at 105.57. The EUR and GBP trading a touch firmer at 1.0424, and well through the 1.0380 pivot we have spoken about of late, and 1.2082, respectively. USDJPY is well over one percent lower at 136.44. The usual risk proxies KRW, TWD, NZD and AUD all fairing well.

Others – Bitcoin and Ethereum happy to join the sleigh ride higher and they sit a healthy distance away from their recent lows. Currently at 17,087 and 1280 respectively.

I’m not sure what was the craziest thing I watched last night; the market’s reaction to the Powell speech, the SBF interview or the madcap two late games in the World Cup??

Call me old-fashioned, naive or just plain dumb, but I didn’t see a whole lot new in Powell’s speech to get the juices pumping to the extent we’d get a 3/4% rally in stocks. Remember, his November presser caused a 1.5% sell-off. Anyway we are where we are and as we noted in yesterday’s piece he really needed to say something “new” and “hawkish” to deter the market from rallying, and it was a “sell the rumour buy the fact” kind of night.

Some of the main points of his speech:

So the usual three-pronged attack, with slower but higher and longer, which has been the November mantra but the market was keen to get on the rally train and as we always say let the market speak even though you don’t agree with the words.

Some other things of note from the speech were a nod to the amount of early retirements, which was driven by the loose monetary policy over the pandemic period and how these numbers have been a major cause in the labour market tightness. He also noted that the natural rate of unemployment had shifted higher and this was not a glitch but rather a feature and based on that theory it would suggest they can tighten further and look to cut rates later in the cycle than normal.

He alluded to “significantly positive” real rates as a measure of assessing how restrictive policy is, and we remain very much in non-restrictive territory based on Core PCE. Speaking of which, he is looking for 5% for today’s number.

So where does this leave us, well, 50bps is back up in the high 70s percentage wise as the most likely outcome for the Dec FOMC. Stocks are in nosebleed territory, with the topside breakout level in S&P at 4110 very close. I guess it’s over to the numbers with the Core PCE today and NFP tomorrow for further direction. Will we see a Timiraos WSJ article over the next ten days if things get out of hand? Feels different this time for some reason but let’s see.

One final thought, as I said not a whole lot new in the speech, but stocks were determined to rally. So we ended up getting a really nice month-end mark out for all those Wall Street books as they close down for what was the last “real” month of trading for the year. Bonus cheques anyone? Just saying.

As ever, the FXMacro Guy does a great summary of Powell’s speech as well as the other central bank speakers on the day and I post his thread at the bottom.

Wow that was surreal. So he is the super whizkid genius when he’s courting investors, regulators and politicians, but now he’s a naive, innocent, misunderstood dork who can’t even code and is way too dumb to be a criminal mastermind.

I have another word for him, but I won’t type it here!

Outwith the moral dilemma of why he is allowed a platform which is another whole chapter, the interview itself told us very little new of note. The questions were in the main, pointed enough and certainly weren’t softballs, but anything tough he either didn’t answer, the feed went down or he called it an “oversight”.

He lays the blame firmly on accounting mistakes, his “girlfriends” fund and his lack of knowledge surrounding the commingling of funds.

There were some classic soundbites, and I post some articles below for further reading, but one of my favourites regarding his disastrous back and fore with the VOX journalist was a cracker;

“the DMs with the Vox reporter (Kelsey Piper) were meant to be private. I forgot she was a reporter.”

Believe it or not, he is off to Good Morning America today for a further interview where he will look coyly through his curly barnet like a latter-day Princess Diana and play dumb. He may “only” have $100k in the bank, but he sure has paid his PR people handsomely.

Several regions starting to lift lockdowns either gradually or full lifting of restrictions. There also seems an effort to relax some of the protocols surrounding contact with covid carriers.

In addition, the Vice Premier Sun Chunlan noted yesterday that the virus was indeed weakening and is not proving as troublesome as previously thought. Cases are still rising in the country.

Yes a step in the right direction but we feel that we aren’t close to a full reopening of the country.

As expected, after the softer German inflation prints, the EU flash CPI for November came in much lower than expected at 10% versus 10.4% estimated and 10.6% previously. This raised hopes that the ECB would slow their pace of hikes and go for 50bps in December rather than another 75bps. All well and good, but the big reduction has been the fall in energy prices but we have seen that sector rise again in recent days as a cold snap is anticipated to hit Europe soon. In addition, 10% is still lofty to say the least.

On the US Front ADP employment report came in a lot lower than expected, fuelling speculation that Friday’s main labour report would follow. Historically the correlation has never been that great between the two reports.

Chicago PMI ugly as at 37.2 and back to May 2020 levels bang in the pandemic vortex. Nothing nice in here; prices paid rose at a slower pace, new orders fell at a faster pace, employment fell at a slower pace, and inventories rose at a higher pace. Growth and inflation lower “ i’s beginning to look a lot like deflation”! In the last 60 years the Chicago PMIs at these sort of levels has generally pointed to a recession. Let’s see what ISM brings today. Remember though, bad news is good news if you are stocks. Recession is good!

Overnight it was all about the PMIs with Australia, Japan and China all releasing their final manufacturing PMIs for November. Australia disappointed at 51.3 and down from the previous month’s but still remains above 50. However, both Japan and China remain in contraction, although the China print did beat estimates just.

This morning we get the final manufacturing PMI prints out of Europe and the UK as well as the EU employment report for October.

The afternoon is packed with US data with the main focus falling on the Fed’s favourite inflation measure Core PCE for November, where we expect a cooling in the month to 0.3% from 0.5%, as well as the ISM where there is an expectation that the headline print will fall into contraction.